Researchers at the University of Northern Texas have been changing the meaning of the phrase "a diamond is forever". This is not merely a chemical innovation. Using gunpowder, armadillo ashes, and the cellulose acetate from a Superman film reel, artist Shane Mecklenburger is creating diamonds in order to spur discussion about societal values. In his project Cost of Opportunity, organic chemist Dr. Justin Youngblood joined him on this endeavor.

"We can all relate to diamonds as objects with a certain value that everyone recognizes," Mecklenburger said. "So seeing a diamond made from something we don't associate with a high market value points out the way we value things. This project is asking : What is this worth?"


The first diamond that Mecklenburger synthesized started with material from the explosive  gunpowder of a .223 caliber Remington assault weapon's cartridges. The next diamond was made from the cremains of Nine Banded Armadillos that are killed on highways in Texas. The final diamond to be exhibited in the project is made from a 1935 film reel of Superman, with the specific part of the reel where Superman crushes coal into a diamond in the palm of his hand.


Mecklenburger looks to both nature and the public for inspiration for his projects. While he is an Assistant Professor of Art at The Ohio State University by day, his personal interest is in exploring "personal and cultural valuation, materiality, and the way market pressures have altered both the definition and function of art". Incidently, a walk in Chicago spurred this project in particular. As Mecklenburger walked past "Jewler's Row" on his way to the School of the Art Institute of Chicago, he was struck by the fact that diamonds have been a commodity for hundreds of years, and that many people would sacrifice a great deal to own such a piece of luxury.


Similarly, when the project was first proposed, the University asked, "Who owns the diamonds once they are synthesized?" Hence, the idea of auctioning the $3000 diamonds  was introduced. In auctioning the diamonds, the researchers look forward to seeing how the public will value this contribution to the fields of both art and science. While the team knows the amount necessary to fund such a project, Mecklenburger looks forward to seeing what it's worth in the eyes of the public. The money raised at auction will go towards creating new diamonds in the future. 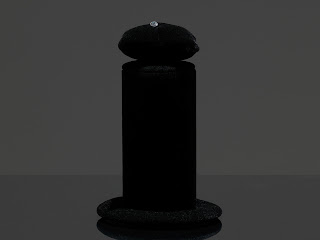 Superman Diamond
When trying to get the funds for this project, Mecklenburger was often faced with evaluators who felt that this project failed "to solve a problem"-a major criteria in receiving a grant for a project that is so interdisciplinary. His response was a quote from media artist Osman Khan saying, "Art doesn't solve problems! It creates them." After multiple grant cycles, the project was finally approved for funding, with its reception being both positive and negative.
I find this project to be incredibly original and thought-provoking. I often wonder why, in this life, we value the things that we do. The Cost of Opportunity project brings this issue front and center and gives a new meaning to the phrase "a diamond in the rough".
If you want to learn more, look at the links below.
Collaborating with the Enemy by Shane Mecklenburger
Is a Diamond Forever?
Perpetual Care(Roadkill Diamond documentation) video by Shane Mecklenburger